Evian gets a 5pt major and 2 RWB to 5pt majors in Texas at their ASCA show and all under breeder judges! Dre also goes RWD to the major. We would also like to congratulate Kym and Brandi Base with their Power granddauger, Party, on her 5pt major and RWB! Brandi also was Best Junior at 2 shows.
​

We attended the Indian Territories ASCA show in Oklahoma City.Folgers took a 5 pt major going BOW and BOS over several nice dog specials to finish his ASCA championship. Congrats Lori and Folgers!
My Bean took yet another RWB to a 5 pt major on Saturday also.
​

I was having some show withdraw and went all the way to Denver for an AKC show. On Friday,Maverick went WD under breeder judge Leslie Sorensen for a 4pt major!! There were 3 dogs that didn't show up so it went from a 5pt to a 4pt major. That leaves him needing 1 point to finish.
​

Jackie Storrer went down to Texas to an AKC show over the weekend with her boy Jag. He got second in his class Saturday, but went WD on Sunday for his first points at his first AKC show.
Way to go Jackie!
​

We went to the Salina AKC show and had a great weekend. Friday Dre was RWD and Trina was RWB. Saturday Dre took WD and BOW for the major. Saturday evening we had an ASCA show and Dre went WD then Evian took WB and BOW. Sunday at the AKC show Dre won BBX went RWD and Trina (Harley's littermate) went WB,BOW, and BOS over a special. Evian won the large BBX class and went RWB to Trina.
​

Trina goes WB at both OZ ASC shows in Salina. She is Harley's full litter mate. Heff went RWD at the 2nd show. And our new puppy (M) went BOBP at the 1st show with lots of puppies.
​ 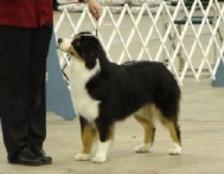 Harley and Maverick are both invited to the Eukanuba National Championship!!

We went to an AKC show in Enid OK. There wasn't a major, but we had lots of fun anyway. Harley was WB/BOW Saturday, then WB again on Sunday. Maverick went WD/BOW and BOB bred by on Sunday. He then went on to get a bred by group 3.
​

There was an OZ ACA show here in the area we went to.Dre went WD Saturday and Sunday to pick up 2 majors. Then Evian went WB/BOB Sunday for her first major!  Maverick was BOB at both shows on Saturday. Maverick and Dre's littermate, Moon, also went RWD to Dre on Sunday.
​

We have another new Champion! Evian went WB/BOW for a 5 pt major at the ASCA show in Columbia MO. She also picked up a Jumpers leg in agility. Bean came back out and ran in regular agility and got 1.5 legs too.
​

I stayed here in Wichita for the AKC and ASCA shows. Saturday Jag went RWD to a 5 pt major at the AKC show. Then at the first ASCA show that evening Dre goes WD/BOW and Evian goes WB both for majors. At the second show Dre goes WD again to finish his championship and Evian went RWB.  Dre has gone WD for majors the last 4 times in the ring.
​ 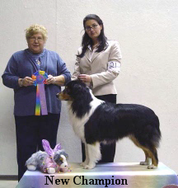 Jackie took her Destiny X Merlin son, Jag,to Nationals. She reports back that he won the American Bred class!
​

I took several dogs to an ASCA herding trial with 2 conformation shows in the evening.
We tried 4 dogs on stock and Folgers, Harley, Evian, and Jag all passed the test to receive their HICs.
That evening at the 1st show Kym Base's Power granddaughter, May bullen, got the major and finished her ASCA championship. Our Bean went RWB to the major again.And Lori Mitchell's Folgers went WD, BOW for his 3 major.
At the 2nd show, Harley went WB for her 3rd major.

Lori and I went to Texas for an ASCA show and agility trial. I didn't show much, but we had a great time in the agiltiy ring. Bean got 2 regular legs to finish her title, 1 gamblers leg, and 2 jumpers legs for a new title with an awesome yard per second time of 4.99 and 5.47! Folgers picked up 2 regular legs, 2 gamblers legs for a title, and 2 perfect jumpers legs also for a title with yps times of 6.04 and 5.98! Folgers also showed in BOB at the show and went BOS over several 10 ten ranked specials! Heff was shown tiwce and won the BBE class both times.
​

I took Maverick and Harley to Tulsa's AKC show for Friday and Saturday. Friday Maverick was RWD to the major. Saturday Harley went WB for a 5 pt major and was Best BBX. She then went on to get a BBX Group 1!!
​

We have another new champion! Jackie's Destiny son, Jag, finished his AKC Championship at the Kansas City show after just turning 2 yrs old. 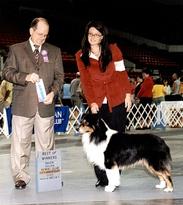 Kym Base took her Power granddaughter, Haley, to ASCA Nations in New Jersey. Sunday she went Premiere 10. Then on Tuesday she was in the Inventational with the other top 30 dogs in ASCA and placed 5th over the other top dogs!!! Congrats Kym!

W attended the Sunflower Cluster and the GWASC Specialty here in KS.
We had a GREAT show at the Specialty. I showed 6 dogs and they all did something.
Harley  went Winners Bitch, Best Of Winners, AND Best Bred By In Show!!!!  (5 pt Major)
Maverick won the Bred By dog class. So we had both BBX winners.
Evian placed 4th in Am. Bred bitches
Heff won the 6-9 puppy dog class
Dre placed 2nd in Am. Bred dogs
Folgers won the Open black dog class

We went to an AKC show in Salina and had a wonderful weekend!!  Harley goes WB, BOW to finish her AKC Championship on Friday. Saturday Dre takes WD for another major. All three days a Power relative went WD. Dre, a Power son on Saturday, then Kym Base's Encore Friday, a Power grandkid, and then Sunday Cruiser, a Power Great grandkid.

Lori and Folgers attended an agility trial in Omaha, NE. They qualified in both open runs and finished his Open Standard title.
​

We went to Columbia  MO for the Mid- America ASCA club show and agility trial.
Harley was BOS on Friday and helped Carley in Jrs getting 2 Reserve Jr Handlers  and a Best Jr Handler. Heff went WD for a 5 pt major and then RWD the next day. Bean got 2 elite Jumpers legs and finished her title with first place in both. She got her last Open regular leg for that title too with a 1st place. To top it off Bean got High In Trial Veteran on Saturday and Sunday! Evian got a novice Gamblers leg to finish her title, 2 Jumpers legs to finish that title, and a Regular Novice leg. She place 2nd or 3rd in each class. Evian also stopped by the Lawerence AKC Trial on Friday and got a Novice Standard leg too!

We went to Oklahoma City to the ITSCA show. Bean needed 2 singles to finish and went WB for a 4 pt major to finished her championship! She finally ended her RWB streak. Kym Base's Power granddaughter, Haley, also was Best Of Breed at 2 of the shows.
​

We went to Enid OK for an AKC show and agilty trial. Bean got a Standard and a Jumper legs in Excellent.Evian went WB and RWB, Folgers was RWD, and Dre was WD and Best Breed By. Dre then went on to get a Group 2 in Bred By. 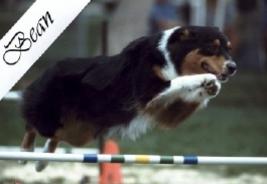 We went to Garden City's AKC show and had an awesome weekend. On Saturday Maverick went WD/BOW/BOB to finish his championship! He then went on to the Group ring where he recieved a Group 2!! I didn't show Mav on Sunday, but that was ok. Harley  went WB/BOW/BOB! She made the cut of 5 dogs, but no placement.  Julia ran Evain in her first agility trial and got a clean run in Jumpers and 1st place!
​